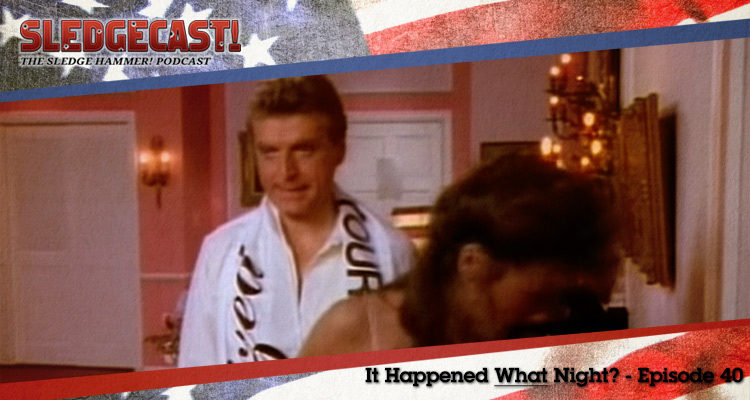 The fortieth episode of Sledge Hammer was titled It Happened What Night? and was the eighteenth episode of the show’s second season and the penultimate show of the run. Sledge and Dori are seconded to the Narcotics team to help bust a big drug deal. In this podcast Gerry and Iain look at a forgotten evening.

When an old friend of Trunk’s, Roy Talbot (Stanley Brock), arrives at the precinct to request the assistance of Sledge and Dori in completing one last operation ahead of his retirement the Captain is happy to help out.

Hammer and Doreau pose as newlyweds and occupy the bridal suite next door to the anticipated bust, cuddling through a hole in the wall. When a pushy bellboy starts them off on a bottle of champagne the duo’s composure starts to slip and they are discovered passed out in bed after the operation has gone badly wrong. A disciplinary hearing stats and looks bad for both officers, until Roy Talbot Jr (Mike Pniewski) shows up with some dramatic evidence.

The episode was directed by Bill Bixby in the seventh of his eight episodes, with a script by Mark Curtiss and Rod Ash, the last of their five collaborations for the show.

If you have thoughts on any aspect of It Happened What Night? please share them below, or find us on Twitter at @sledgecast.

It Happened What Night? was released in 1988. It is 30 minutes long and originally aired on the ABC network. This episode is available on the Sledge Hammer DVD box set from Laser Paradise (German/English language) in Region 2 and from Image Entertainment in Region 1 (USA).