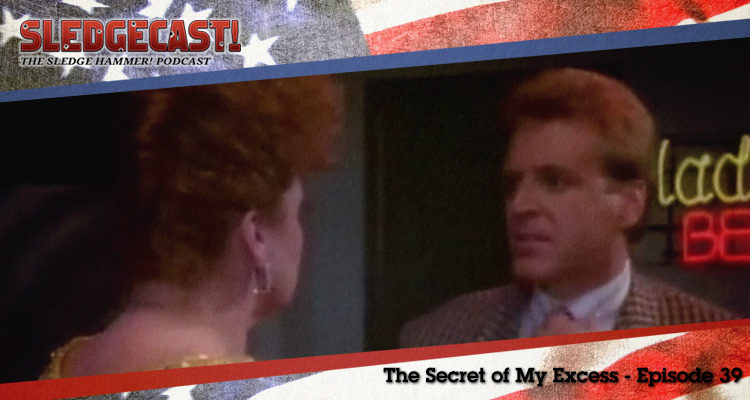 The thirty ninth episode of Sledge Hammer was titled The Secret of My Excess and was the seventeenth episode of the show’s second season. Sledge is assigned a top secret mission by Governor La Chatte. In this podcast Gerry and Iain look at a great backwards thinking man.

Sledge is assigned a covert mission by James Karen‘s Fritz La Chatte, the Californian Governor, whose little girl has left him. Assuming the Governor is referring to his daughter, Hammer works diligently to locate her without raising suspicions at work. Dori is a bit more alert than he thinks though and is soon on his case.

After interrogating Joey the Slug (Mark Blankfield) and making a nuisance of himself at Big Mabel’s (Marianne Muellerleile) bar, Sledge tracks down the girl he’s looking for – Angel (Mary Otis – we think this is the same Mary Otis. Please correct us if you know better!). Hammer and Doreau deliver the girl to La Chatte in the middle of a fundraiser, causing some consternation as his wife (Anna Marlowe) reveals he has no daughter. Ernie Sabella (Al Fresco, a sleazy motel manager) and Mark Holton, as the Governor’s resourceful aide, also appear.

The episode was directed by Dick Martin in the last of his three episodes, with Alicia Marie Schudt penning her only Sledge Hammer! script.

If you have thoughts on any aspect of The Secret of My Excess please share them below, or find us on Twitter at @sledgecast.

The Secret of My Excess was released in 1988. It is 30 minutes long and originally aired on the ABC network. This episode is available on the Sledge Hammer DVD box set from Laser Paradise (German/English language) in Region 2 and from Image Entertainment in Region 1 (USA).