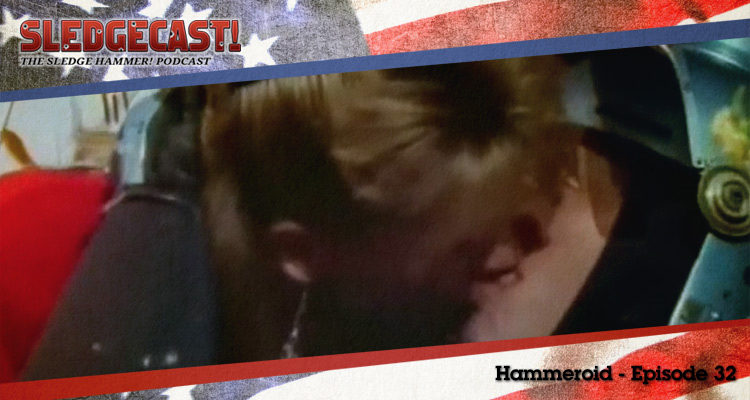 The thirty second episode of Sledge Hammer was titled Hammeroid and was the tenth episode of the show’s second season. After suffering serious injuries in a fight with an android, Sledge is fitted with some cybernetic enhancements of his own. In this podcast Gerry and Iain look at a moment of passion for Hammer and Doreau.

After a seemingly indestructible villain robs an armoured van Sledge and Dori’s investigations lead them to the laboratory of Dr Arthur (Art) Deco (Richard Moll), who confirms the criminal is in fact an android of his own creation named BORC. It appears BORC is under the control of Deco’s former colleague Malcolm Dench (Armin Shimerman) and set to continue his violent rampage.

After a crushing encounter, Sledge is close to death but Deco installs a series of cybernetic implants which not only keep him alive, but make him part-android. Hammer’s network of informants lead him to General Skull Fracture (Sid Haig) who succumbs to Sledge’s robotic attempts at persuasion and gives up Dench’s location, setting up a grand finale where Dori must face the possibility of losing Hammer for good.

The episode was directed by Gary Walkow, his second of three stints behind the Sledge Hammer! camera, and was written by Ron Friedman, his only contribution to the series. A year earlier Friedman wrote the classic animated Transformers movie, still the best Transformers movie ever produced.

If you have thoughts on any aspect of Hammeroid please share them below, or find us on Twitter at @sledgecast.

Hammeroid was released in 1987. It is 30 minutes long and originally aired on the ABC network. This episode is available on the Sledge Hammer DVD box set from Laser Paradise (German/English language) in Region 2 and from Image Entertainment in Region 1 (USA).