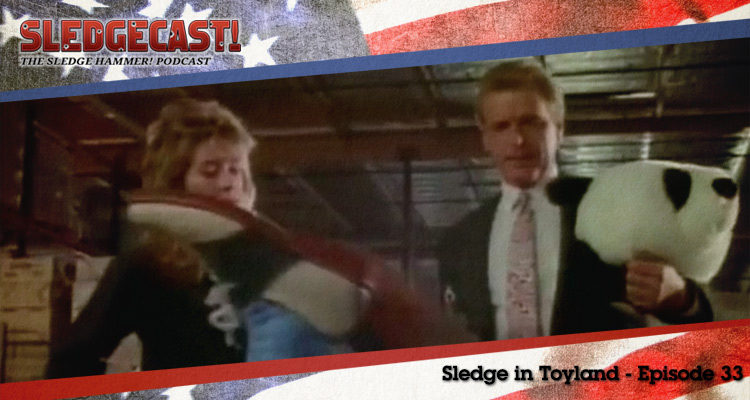 The thirty third episode of Sledge Hammer was titled Sledge in Toyland and was the eleventh episode of the show’s second season. When two people are killed by kids’ toys armed with real ammunition Sledge and Dori track the perpetrator down to a local toy factory. In this podcast Gerry and Iain look at a painstaking investigation featuring multiple suspects and a group of giant humanoid rabbits.

When first Ronan O’Casey‘s Milo Tieup, a wealthy toy factory owner, and next his mistress Felicia Gilmore (Eli Marder) are killed by specially adapted Tieup toys, Sledge and Dori try to narrow down the potential suspects. Tieup’s widow Inez (Michele Marsh) and her lover Harold Bell (David Clennon), a designer in the Tieup toy empire, fall under early suspicion, but their alibis seem to absolve them.

Ultimately it is rival toymaker Claude Goldfunger (Michael Ensign) who bears responsibility for the murders, but after confessing he opts to try and take down Hammer and Doreau rather than come quietly, with predictable results.

The episode was directed by Gary Walkow, his last of three Sledge Hammer! episodes and was written by a familiar duo, Brian Pollack and Mert Rich, the eighth of their ten shows for the series.

If you have thoughts on any aspect of Sledge in Toyland, please share them below, or find us on Twitter at @sledgecast.

Sledge in Toyland was released in 1987. It is 30 minutes long and originally aired on the ABC network. This episode is available on the Sledge Hammer DVD box set from Laser Paradise (German/English language) in Region 2 and from Image Entertainment in Region 1 (USA).