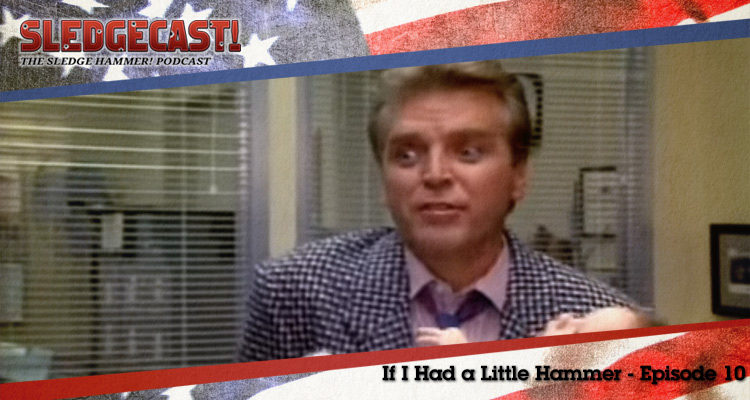 The tenth episode of Sledge Hammer was titled If I Had a Little Hammer and was the tenth episode of the show’s first season. Hammer and Doreau pose as prospective adoptive parents to smoke out a baby-stealing operation. In this podcast Gerry and Iain look at a unique challenge for Hammer.

The theft of an entire nursery full of newborn babies puts Sledge and Dori into uncharted territory. With Michele Marsh‘s Nurse Robbins and Brion James‘ Felix Ridel looking to stay one step ahead, Hammer and Doreau pose as prospective adoptive parents to get to the bottom of the case.

They’re tipped off by Shy Eddie (Dennis Fimple) of a lead at a local adoption agency and although Miss Caulder (Margaret Muse) rejects them as unsuitable, her assistant Margaret (Sherri Stoner) points them in the right direction. Jeannie Elias and Grammy-nominated Burton Collins also appear, as distressed parents looking to be reunited with their baby.

The episode was directed by Kim Manners who, yes, is a man – contrary to anything you may have heard on the podcast. The same cannot be said of writer Deborah Raznick, though it can of Daniel Benton, who was also a writer on the episode. This was the sole Sledge Hammer involvement for all three.

If you have thoughts on any aspect of If I Had a Little Hammer, please share them below, or find us on Twitter at @sledgecast.

If I Had a Little Hammer was released in 1986. It is 30 minutes long and originally aired on the ABC network. This episode is available on the Sledge Hammer DVD box set from Laser Paradise (German/English language) in Region 2 and from Image Entertainment in Region 1 (USA).