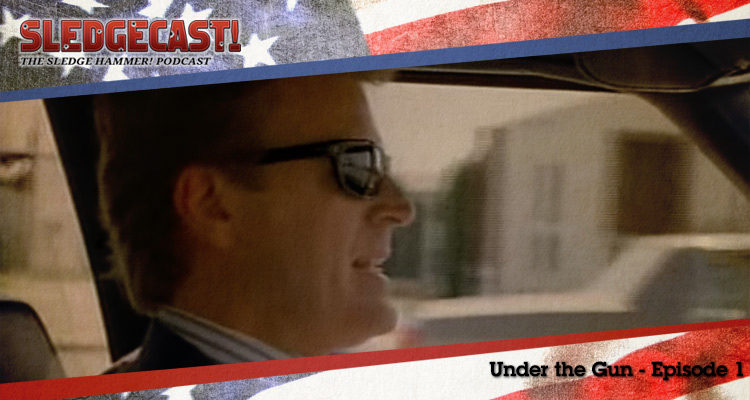 The first episode of Sledge Hammer was titled Under the Gun and was the pilot and opening episode of the show’s first season. Sledge returns from suspension and teams with a new partner to investigate the kidnap of the mayor’s daughter. In this podcast Gerry and Iain look at Sledge Hammer’s debut and his first case.

In the pilot we are introduced to David Rasche as our eponymous ‘hero’ Sledge Hammer, Harrison Page as his superior officer, Captain Trunk, and Anne-Marie Martin as Dori Doreau, a terrorist psychologist.  Hammer and Doreau are assigned to investigate the kidnapping of Francine Flambo (Judie Aronson), daughter of Mayor Jack Flambo (John Vernon). Hammer’s irregular approach leads to a dramatic conclusion.

There are supporting roles in this episode for John Lawlor as Police Chief Reisner, Don Stark in the first of his two appearances as Kurt Kruggle and Joanne Baron as the mayor’s wife, Mrs Flambo, who Hammer at one stage accuses of having been involved in her own daughter’s abduction. Interestingly, Baron founded and now co-owns an acting studio with D.W. Brown who played Williard Luxley in this episode.

Martha Coolidge directed the pilot, her only directorial involvement with the show. Creator Alan Spencer wrote the episode, the first of his five writing credits on the show.

If you have thoughts on any aspect of Under the Gun, please share them below, or find us on Twitter at @sledgecast.

Under the Gun was released in 1986. It is 30 minutes long and originally aired on the ABC network. This episode is available on the Sledge Hammer DVD box set from Laser Paradise (German/English language) in Region 2 and from Image Entertainment in Region 1 (USA).