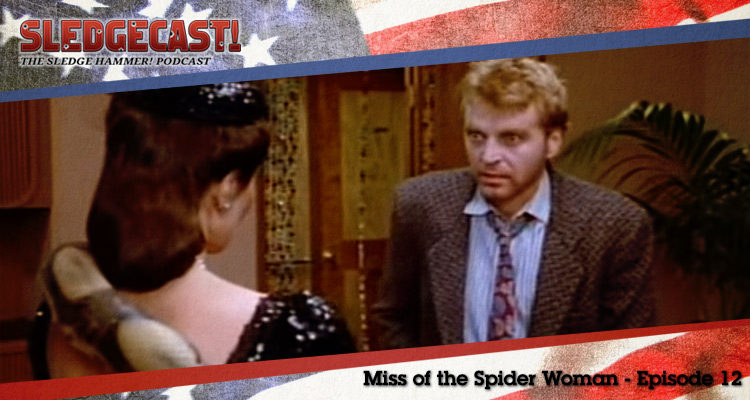 The twelfth episode of Sledge Hammer was titled Miss of the Spider Woman and was the twelfth episode of the show’s first season. An unfortunate error sees Sledge poisoned with snake venom with just hours to live. In this podcast Gerry and Iain focus on the inspector’s race against time.

The mysterious Juanita (Eileen Barnett) is looking for revenge on her former lover, Alejandro, who lives next door to Sledge. Her henchman Ernesto Gomez (Shelly Desai) is charged with delivering the venom extracted from Juanita’s pet snake and he enlists an associate, Cindy (Karen Lynn Scott), to carry out the job. Cindy makes a critical error, entering Sledge’s apartment instead of Alejandro’s and poisons the inspector.

While Dr Warneke (Alan Blumenfeld) searches for an antidote, Sledge and Dori use Hammer’s last 8 hours of life to try and solve the case, with help from his landlady, Miss Hotchkins (Brenda Strong). There were cameo appearances for Larry Wilmore as a mailman and Patrie Allen as a police officer with a vital clue.

The team behind the scenes were a familiar group, with Chuck Braverman directing from a story by Al Jean and Mike Reiss.

If you have thoughts on any aspect of Miss of the Spider Woman, please share them below, or find us on Twitter at @sledgecast.

Miss of the Spider Woman was released in 1986. It is 30 minutes long and originally aired on the ABC network. This episode is available on the Sledge Hammer DVD box set from Laser Paradise (German/English language) in Region 2 and from Image Entertainment in Region 1 (USA).