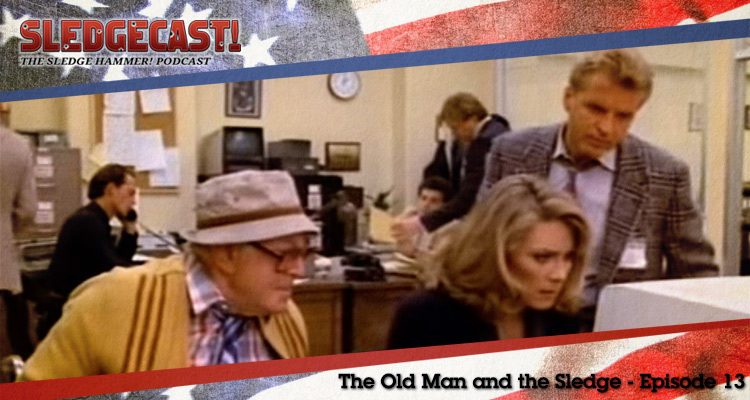 The venerable Stephen Elliott took centre stage in this episode as Gilmore Yates, a retired cop who inspired Sledge as a young man. The first officer to shout ‘Freeze!’ and an early proponent of police brutality, Yates is not doing so well in retirement. Hammer and Doreau arrive at a disturbance to find he has taken issue with a Social Worker (Daniel Radell), refusing to voluntarily move to a care home.

Sledge and Dori (the former more enthusiastically than the latter) allow Yates to ride along with them the next day, taking him to the firing range where his initial disgust at potentially taking a security guard job is outweighed by the salary available. Yates takes up position at Mr Smith’s (Alan Fudge) jewellers and is shot during a robbery soon thereafter. Dori and Sledge think the case is cut-and-dried, but Yates spots a discrepancy that puts them on the road to catching the true criminal.

The behind-camera talent was again drawn from a familiar pool, with Chuck Braverman working from a story by Mert Rich and Brian Pollack.

If you have thoughts on any aspect of The Old Man and the Sledge, please share them below, or find us on Twitter at @sledgecast.

The Old Man and the Sledge was released in 1987. It is 30 minutes long and originally aired on the ABC network. This episode is available on the Sledge Hammer DVD box set from Laser Paradise (German/English language) in Region 2 and from Image Entertainment in Region 1 (USA).