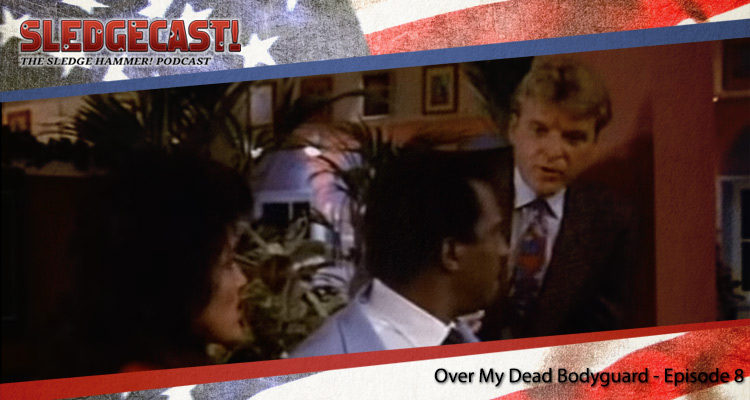 The eighth episode of Sledge Hammer was titled Over My Dead Bodyguard and was the eighth episode of the show’s first season. Sledge steps up to protect Captain Trunk when his life is threatened. In this podcast Gerry and Iain look at the developing respect between Hammer and Trunk.

Sledge is handed another challenging assignment in this episode as Captain Trunk’s life comes under threat ahead of his crucial testimony against a narcotics syndicate. With Hammer personally tasked with ensuring the Captain’s safety, Trunk pushes back – insisting on carrying on with his work. Hammer foils an immediate assassination attempt within the police precinct, before he and Doreau accompany Trunk to an evening meal with his ex-wife Renee (Tracy Reed).

A further attempted killing is prevented at Renee’s home before Trunk is shot through the window of Hammer’s apartment. A stroke of genius from Hammer sees the media report Trunk’s death, but a crucial mis-step puts the lead assassin (Star Trek‘s Robert O’Reilly) back on the trail before a final operating room showdown where Hammer and the assassin go head-to-head with Trunk’s life on the line.

The previously blacklisted Charles S. Dubin was in the director’s chair for this,  his only Sledge Hammer credit. The episode was the second of five by The Simpsons writing duo Mike Reiss and Al Jean.

If you have thoughts on any aspect of Over My Dead Bodyguard, please share them below, or find us on Twitter at @sledgecast.

Over My Dead Bodyguard was released in 1986. It is 30 minutes long and originally aired on the ABC network. This episode is available on the Sledge Hammer DVD box set from Laser Paradise (German/English language) in Region 2 and from Image Entertainment in Region 1 (USA).