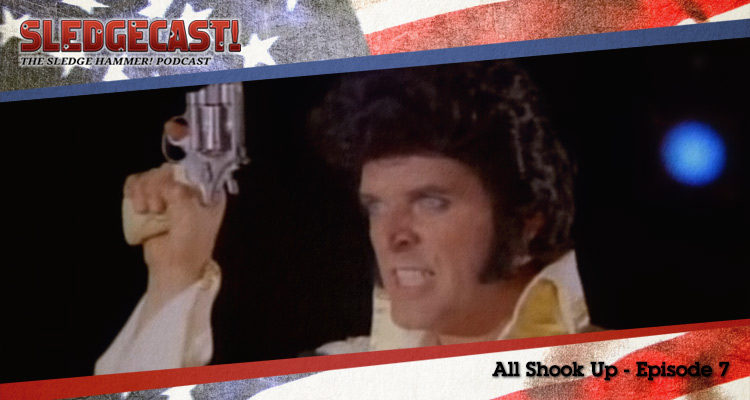 The seventh episode of Sledge Hammer was titled All Shook Up and was the seventh episode of the show’s first season. Sledge acts as bait when a serial killer starts murdering Elvis impersonators. In this podcast Gerry and Iain look at some stylish undercover work from Hammer.

After his assignment in the local high school in the previous episode, Sledge is forced to go undercover to solve a string of murders targeting successful Elvis impersonators when coroner Norman Blates (Kurt Paul) determines the victims have been bludgeoned to death with a gold-plated microphone. After taking tutelage from Tom McFadden‘s Mr P at the local Elvis School, he takes to the stage. (There is a real-life acting coach called Thom McFadden. It would be great if it were the same person, but sadly there is nothing to confirm the connection.)

Raymond Ma plays Yamamoto, initially observed as the Elvis School’s janitor, but later revealed to be the killer. His motive is to take revenge on inferior Elvis impersonators, who triumph in spite of his own more efficient impersonations. Director Jackie Cooper makes an uncredited appearance in the audience of Sledge’s Elvis gig.

Cooper directed the second of his four Hammer episodes, working from a script by series creator Alan Spencer.

If you have thoughts on any aspect of All Shook Up, please share them below, or find us on Twitter at @sledgecast.

All Shook Up was released in 1986. It is 30 minutes long and originally aired on the ABC network. This episode is available on the Sledge Hammer DVD box set from Laser Paradise (German/English language) in Region 2 and from Image Entertainment in Region 1 (USA).