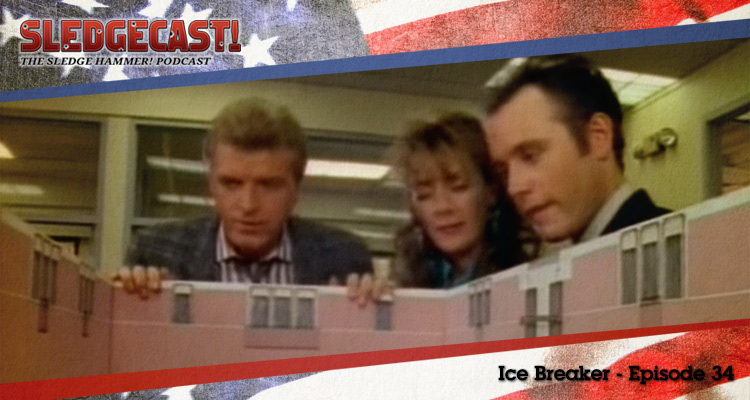 The thirty fourth episode of Sledge Hammer was titled Ice Breaker and was the twelfth episode of the show’s second season. An Interpol agent requests help securing a venue for the visit of a prominent archbishop. In this podcast Gerry and Iain look at Sledge’s ability to stand and deliver.

During a meeting with Captain Trunk Interpol agent Lionel Dasham (Adam Ant) is assigned Sledge and Dori to assist in the security preparations being undertaken at a local venue ahead of a visit from the Archbishop (Gene LeBell). Sledge is quickly dropped from the team and begins looking at a new case involving a dead body. When coroner Norman Blates (Kurt Paul) confirms the body is the real Lionel Dasham he realises Dori, who has started to fall for Dasham, and the Archbishop are in danger.

Teaming with Trunk to find and eliminate the threat posed by Dasham, Sledge finds Dori, who had been momentarily incapacitated by the villain after discovering his true identity. The case has become personal for her, so she pursues the fake agent while Hammer looks to protect the Archbishop (joined on stage by a local clergyman played by Fritz Feld). That proves a more physically challenging task than Sledge might have anticipated.

The episode was directed by Bill Bixby, his fifth of eight Sledge Hammer! episodes and was written by Mark Curtiss and Rod Ash (their third of five Sledge scripts), from a story by Chris Ruppenthal – his third of four contributions to the show – who would go on to write ten Quantum Leap episodes and two for The X-Files.

If you have thoughts on any aspect of Ice Breaker, please share them below, or find us on Twitter at @sledgecast.

Ice Breaker was released in 1987. It is 30 minutes long and originally aired on the ABC network. This episode is available on the Sledge Hammer DVD box set from Laser Paradise (German/English language) in Region 2 and from Image Entertainment in Region 1 (USA).