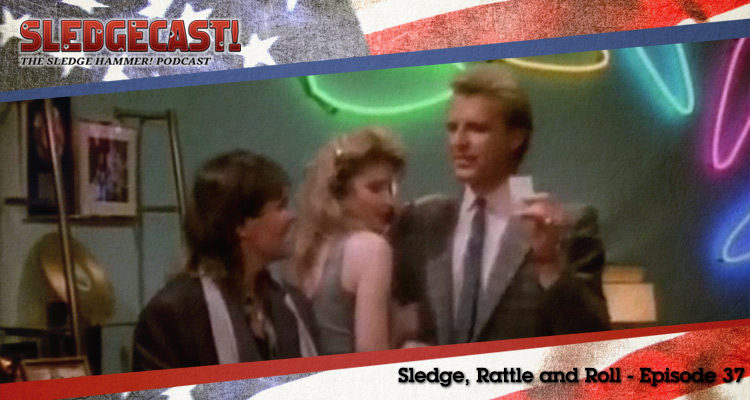 The thirty seventh episode of Sledge Hammer was titled Sledge, Rattle and Roll and was the fifteenth episode of the show’s second season. When a rock star is killed, his bandmates die in a plane crash and their producer is knifed at his desk, Sledge must overcome his loathing of rock music to investigate the case. In this podcast Gerry and Iain look at the consequences of treating people badly.

The murder of a punk rock star, Rak Vulture (Dana Williams), leads Dori and Sledge into an investigation mired in the murky world of the music industry. Rusty’s erstwhile bandmates Rocket, Buzzy and Zippy (Page Mosely, Lee Arenberg and B.J. Barie respectively) deny involvement and set off, while their put-upon roadie Rusty (Tommy Swerdlow) is left to bear the brunt of their ‘edgy’ behaviour.

Manager Jerry Vicuna (Davy Jones of the Monkees) offers Hammer and Doreau little of substance to progress the case, but when the band is killed in a plane crash further enquiries are required. Vicuna’s own death leads our dynamic duo to Rusty, who turns out to be Rak’s more talented and less remunerated brother, who has been working hard to gain a measure of revenge on those who have wronged him.

The episode was directed by Bill Bixby (the sixth of his eight episodes behind the camera), while regular contributors Mert Rich and Brian Pollack provided the writing in their penultimate episode of the show.

If you have thoughts on any aspect of Sledge, Rattle and Roll please share them below, or find us on Twitter at @sledgecast.

Sledge, Rattle and Roll was released in 1988. It is 30 minutes long and originally aired on the ABC network. This episode is available on the Sledge Hammer DVD box set from Laser Paradise (German/English language) in Region 2 and from Image Entertainment in Region 1 (USA).