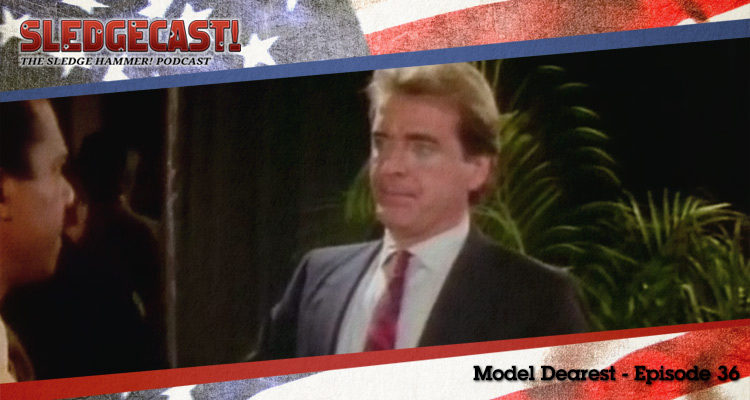 The thirty sixth episode of Sledge Hammer was titled Model Dearest and was the fourteenth episode of the show’s second season. Dori goes undercover without authorisation to try and infiltrate a human trafficking operation. In this podcast Gerry and Iain look at one of the worst attempts at tail covering in television history.

When Sledge hears noises in his hallway his enquiries reveal that his neighbour is missing following an assignment at a local modelling agency and her cousin, Sally (Jill Jacobson), has come to town looking for her. His clumsy efforts to gather additional information lead to a ruined photoshoot, drawing the ire of photographer Don Merrill (Brion James) and the owner of the agency, Jessica Hayden (Deborah Wakeham).

Dori takes a unilateral decision to go undercover at the agency where she is almost exposed by an unwitting Sledge (who has stopped by to apologise to Jessica for his earlier indiscretions). The investigation is assisted, however, in an unlikely way when Hammer’s landlady Miss Davies (Nancy Parker) describes a plumber who was lurking around at the exact time Sally is badly hurt at her cousin’s apartment and Sledge identifies the man as Merrill. Both Hammer and Doreau discover that the agency is selling women to foreign dignitaries, but Dori isn’t about to let herself become the property of a mysterious Sheikh (Mort Sertner) and fights her way clear, just as Sledge reveals himself undercover as a member of the Sheikh’s security team.

The episode was directed by Dick Martin (the first of his three episodes behind the camera) working with a script by returning writers David Ketchum and Tony DiMarco (their last of four collaborations for the show).

If you have thoughts on any aspect of Model Dearest please share them below, or find us on Twitter at @sledgecast.

Model Dearest was released in 1988. It is 30 minutes long and originally aired on the ABC network. This episode is available on the Sledge Hammer DVD box set from Laser Paradise (German/English language) in Region 2 and from Image Entertainment in Region 1 (USA).