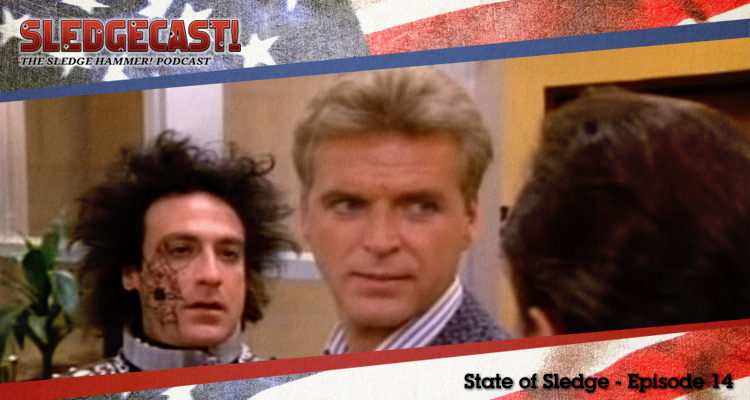 When Tom Henschel‘s Inspector Perkins observes Sledge being Sledge in processing the arrest of cult leader Slag (Mark Blankfield) the glowing report Trunk was hoping for evaporates. Slag is allowed his one phone call and dials Angel (Debra De Liso) who gathers the cultists, including Michel Voletti as a Soldier of Evil, to launch a siege of the precinct until their leader is released.

Sledge, Dori and Trunk try to hold their ground with help (or hindrance) from Perkins, a cadet named Ricky (Darren Powell) and Officer Grace (Toni Attell), while The Doors’ drummer John Densmore cameos as the precinct janitor.

Director Daniel Attias followed his work on To Live and Die on TV with this, his final Sledge episode. The story was by familiar faces Al Jean and Mike Reiss.

If you have thoughts on any aspect of State of Sledge, please share them below, or find us on Twitter at @sledgecast.

State of Sledge was released in 1987. It is 30 minutes long and originally aired on the ABC network. This episode is available on the Sledge Hammer DVD box set from Laser Paradise (German/English language) in Region 2 and from Image Entertainment in Region 1 (USA).