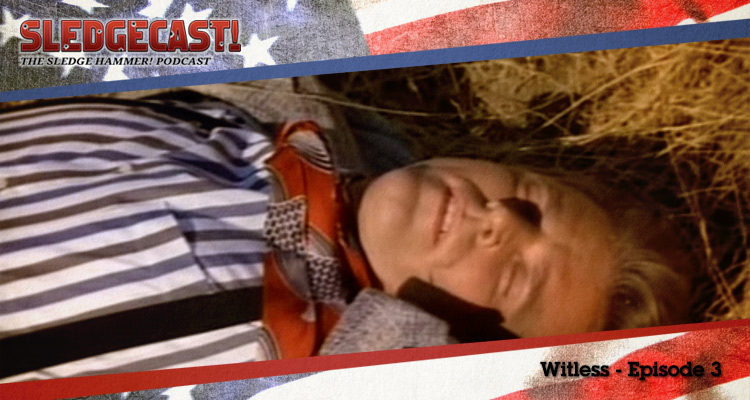 The third episode of Sledge Hammer was titled Witless and was the third episode of the show’s first season. A mafia godfather puts a price on Sledge’s head and Hammer is forced to go into hiding. In this podcast Gerry and Iain look at an early change of pace for the show.

Captain Trunk and Dori Doreau take a back seat in this episode as the threats against Sledge’s life force him to leave the city and his colleagues. After Al Ruscio‘s Don Phillip Souza puts a $1m contract out on him, Hammer survives a series of attempts on his life – including one by Lenny (John Milford), a fellow police officer assigned to transport him to a secret location where he can lie low.

After surviving Lenny’s attack, Sledge is found unconscious at the side of the road by Jacob (Lewis Arquette) and Isadora (Ann Ryerson), members of a religious community that lives in a traditional manner. Hammer is tended to on their farm, but inadvertently discloses his location on a tapped phone call, leading to a final confrontation with Basil Hoffman‘s accountant-cum-hitman Sam Steinway.

Jackie Cooper directed the episode, his first of four Sledge Hammer episodes, with a script penned by series creator Alan Spencer, the second of his five writing credits for the show.

If you have thoughts on any aspect of Witless, please share them below, or find us on Twitter at @sledgecast.

Witless was released in 1986. It is 30 minutes long and originally aired on the ABC network. This episode is available on the Sledge Hammer DVD box set from Laser Paradise (German/English language) in Region 2 and from Image Entertainment in Region 1 (USA).