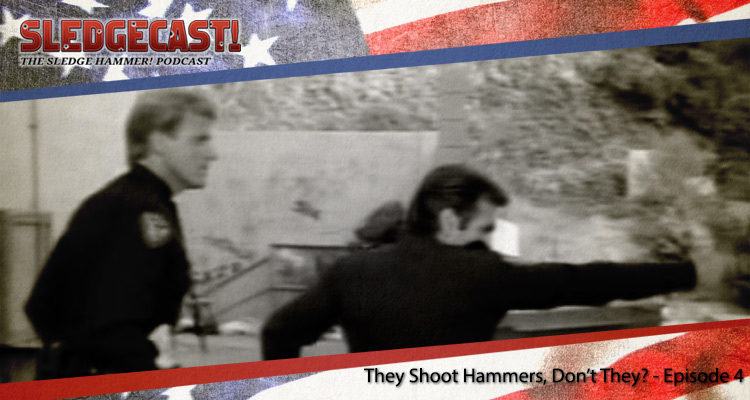 The fourth episode of Sledge Hammer was titled They Shoot Hammers, Don’t They? and was the fourth episode of the show’s first season. Sledge’s former partner escapes from prison and begins a violent rampage, demanding a showdown with Hammer. In this podcast Gerry and Iain look at some character development for Sledge.

Much of the drama returns to the police precinct in this episode as Captain Trunk tries to prevent Sledge from indulging a former rival’s demands for a showdown. Dori Doreau tries to keep Hammer calm, but the inspector is determined to face the challenge. John Kogan (Jack Thibeau), Sledge’s childhood friend/tormentor and later partner in the police force, escapes from prison and has revenge on his mind.

Dennis Fimple makes an appearance as a skittish informant, while there are cameos for Charlie Brill as a suspect in a flashback scene, Simmy Bow as Sledge’s mentor Dead Eye Dan and from Jonathan Brandis and Shawn Donahue as young Sledge and young Kogan respectively.

David Wechter directed the episode, his first of three Sledge Hammer episodes. The teleplay was written by Mert Rich, Brian Pollack and Alan Spencer from a story partly their own and partly by Diana (or Jennie) Ayers and Susan Sebastian.

If you have thoughts on any aspect of They Shoot Hammers, Don’t They?, please share them below, or find us on Twitter at @sledgecast.

They Shoot Hammers, Don’t They? was released in 1986. It is 30 minutes long and originally aired on the ABC network. This episode is available on the Sledge Hammer DVD box set from Laser Paradise (German/English language) in Region 2 and from Image Entertainment in Region 1 (USA).