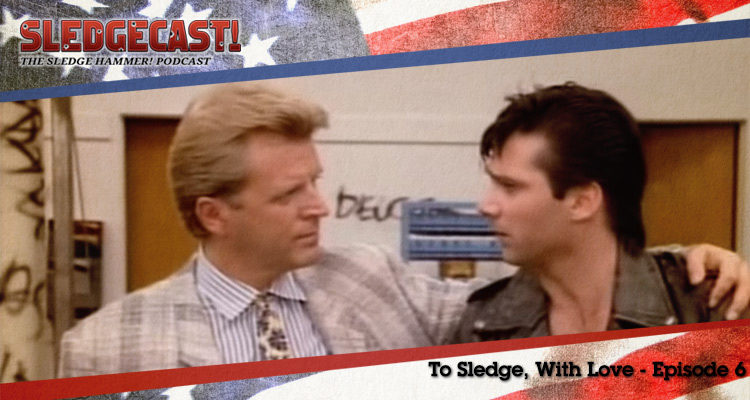 The sixth episode of Sledge Hammer was titled To Sledge, With Love and was the sixth episode of the show’s first season. Sledge is assigned to a local high school when staff struggle to control a group of rowdy teenagers. In this podcast Gerry and Iain look at more character development for Hammer.

It’s another Trunk-lite episode this week as Hammer and Doreau are assigned to corral a group of unruly schoolkids when the teaching staff run out of ideas. One particular member of staff, Mr Meeks (Paul Keith) is reduced to writing punishment lines on his blackboard as the kids, including 8-Track (Stuart Fratkin), Whitey (Paul T. Murray), Squad (Michael Cramer) and Blade (Brian Tarantina) make his life a misery.

The leader of the group is a troubled youngster named Turk (Shawn Klugman) who is in over his head with local crook Ralph Roscoe (Norman Alden). Hammer sees something of himself in these kids and sets about trying to help them see they can have their fun, but within the bounds of the law, simply by seeking careers in policing.

David Wechter helmed the second of his three Sledge Hammer!  episodes, following up the popular They Shoot Hammers, Don’t They?, making him two-for-two in episode titles with commas in them. Jim Fisher and Jim Staahl combined on the first of their two Sledge collaborations.

If you have thoughts on any aspect of To Sledge, With Love, please share them below, or find us on Twitter at @sledgecast.

To Sledge, With Love was released in 1986. It is 30 minutes long and originally aired on the ABC network. This episode is available on the Sledge Hammer DVD box set from Laser Paradise (German/English language) in Region 2 and from Image Entertainment in Region 1 (USA).