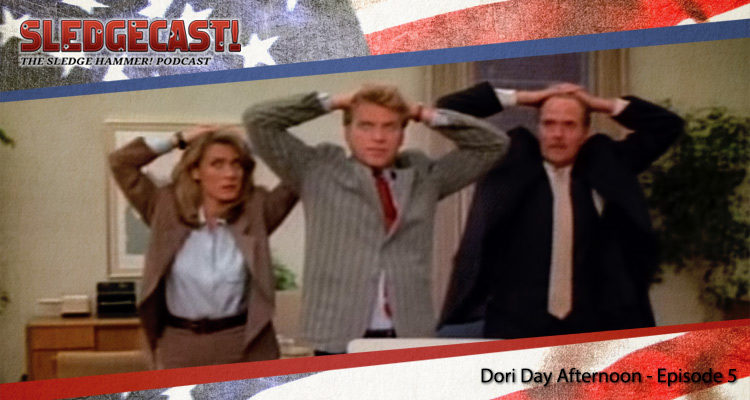 The fifth episode of Sledge Hammer was titled Dori Day Afternoon and was the fifth episode of the show’s first season. Dori and Sledge are held hostage during an armed bank robbery. In this podcast Gerry and Iain look at how the show worked in a largely single-scene setup.

There’s not much for Captain Trunk to do in this episode as he’s left outside when Dori and Sledge are taken hostage, along with other bank staff and customers, by Frank Doubleday and Britt Leach‘s Cliff and Lou. Doubleday and David Rasche take on most of the work in this one, as Hammer looks to extricate the hostages from a sticky situation.

It’s a small cast for this one, with Michael Ensign (as Crandell) and child star Coleby Lombardo the only other actors to have much to do.

James Sheldon concluded a 35-year directing career with this episode – his only work on the show – with a story by Mert Rich and Brian Pollack, who were also involved in the previous episode, They Shoot Hammers, Don’t They?.

If you have thoughts on any aspect of Dori Day Afternoon, please share them below, or find us on Twitter at @sledgecast.

Dori Day Afternoon was released in 1986. It is 30 minutes long and originally aired on the ABC network. This episode is available on the Sledge Hammer DVD box set from Laser Paradise (German/English language) in Region 2 and from Image Entertainment in Region 1 (USA).