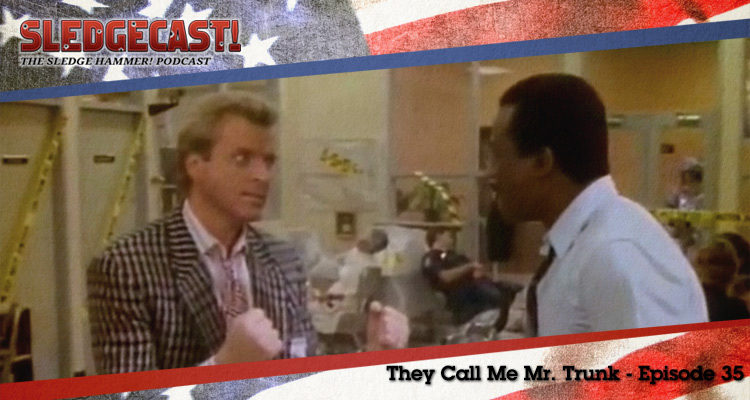 The thirty fifth episode of Sledge Hammer was titled They Call Me Mr. Trunk and was the thirteenth episode of the show’s second season. When Sledge brings a suspect infected by a biological weapon in to the precinct it looks like the time has come to say goodbye. In this podcast Gerry and Iain look at Captain Trunk’s moment in the spotlight.

After a late-night break-in at a secure military facility Colonel Poltz (William Smithers) contacts Captain Trunk to warn him about the intruder, Richard Sirod (Christopher Doyle). Trunk in turn brings Hammer and Doreau on to the case with strict instructions not to touch the suspect if they see him.

When Sledge decides he knows better and brings the soon-to-be-deceased Sirod into the precinct, the military initiates a lock-down that will result in the inevitable deaths of all those left inside. Besides Trunk, Hammer, Doreau, Daly and Majoy the group includes a fake Doctor and Nurse (Norman Fell and Dallas Cole), while there are also appearances for Greg Travis (as Roger, an attorney), Edy Williams (as a girl in a hallucination) and Diane Sainte-Marie as a TV newsreader.

The episode was directed by Seymour Robbie (his only Sledge contribution) from a script by Mark Curtiss and Rod Ash, familiar names both.

If you have thoughts on any aspect of They Call Me Mr. Trunk please share them below, or find us on Twitter at @sledgecast.

They Call Me Mr. Trunk was released in 1987. It is 30 minutes long and originally aired on the ABC network. This episode is available on the Sledge Hammer DVD box set from Laser Paradise (German/English language) in Region 2 and from Image Entertainment in Region 1 (USA).